Posted on September 13, 2016 by thedribblingcode

Off The Pitch: Great to see a big attendance for the occasion which now finds both Main and United now in the top tier of the Sheffield County Senior League.

Lots of very old and young faces turned out for this -one local bird who must’ve been in her seventies at least was attending for the first time in decades + recalled how as a young un she used to swing on the railings on the far terrace, none of which is there any more.

Sport: The match also doubled as the inaugural John Hurley Memorial Trophy – using an old supporters club cup from the 1930s, which is now going to awarded to winners of the Denaby ‘el classico’ each season.
Main took an early lead but were eventually over-run both technically and physically by United, which according to their website makes this their eighth successive Denaby-Derby since they were last defeated.

Some additional photos from this visit can be found in our Flickr album, below (click photo for link): 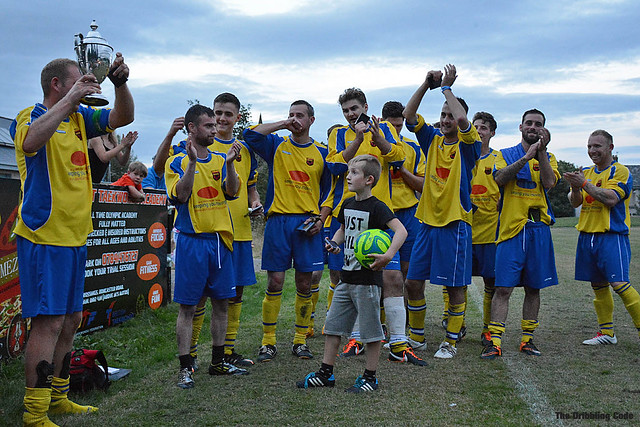 Also for update notifications and occasional other ramblings, add us on Twitter: http://www.twitter.com/dribblingcode

This entry was posted in A-Z by club (home team), Denaby Main, Uncategorized. Bookmark the permalink.